Acid Wizard Studio plopped Darkwood onto the Nintendo Switch, allowing the Unity-based survival-horror game to find a new audience after releasing on Steam for PC and on PS4. The top-down horror game has invited in a brand new audience of gamers willing to check out the ultra-creepy title, and those looking for a walkthrough might be able to find a few useful tips in this article.

YouTuber IndieJames uploaded an 11 hour video covering the complete Darkwood walkthrough and also showing how to unlock the true ending. You can check it out below.

The game opens with a short prologue cinematic and then you end up in a small rundown house.

Grab the pills, the camera, keys, and other items in the next room.

You’ll need to use the keys to open the door and get outside.

There’s a dying dog just outside,.

You’ll also find a an axe just beyond the gate.

There’s a bone you can collect just beyond the gate.

Make your way due southwest through a passage and collect the supplies, including the matches and wood. You’ll be able to craft a torch and place it in your quick-slot.

Make your way through the area and you’ll encounter a man who is lying on the ground unconscious. He has a key with the number 21 on it.

After another short cinematic, the unconscious stranger will wake up and you’ll be able to play as him. Search the room for the supplies, including the shovel and flashlight. Equip the shovel as a weapon and the flashlight. You can also craft some healing supplies by opening your crafting menu and using the items you picked up to heal yourself.

You’ll have to fight the man using the shovel.

Before you get to the man there’s a locked chest and you’ll need the right combination to open it. The combination is: 4892 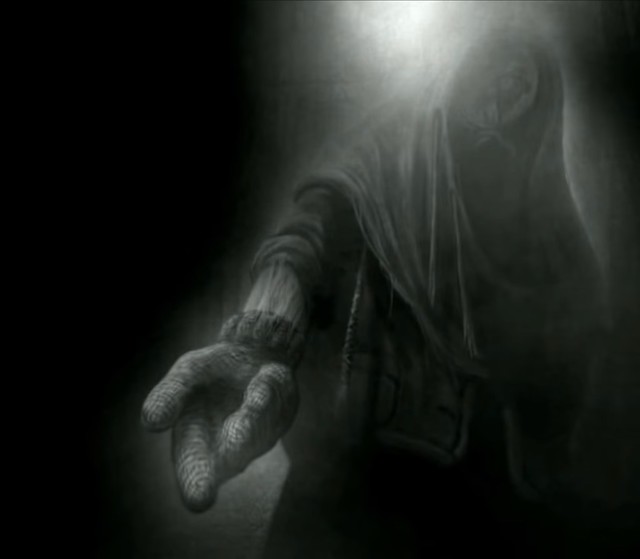 Another cinematic will play after you kill the man and then Chapter 1 will begin.

You can examine the pot with the protective substance in it. You’ll need to return to the pot in order to use the substance once you’ve gathered enough mushrooms.

Exit the room and gather the supplies within the shack, and any kind of lockpicks. There are also some red mushrooms just outside that you can take. The red mushrooms are how you upgrade your character. You’ll need to collect enough to fill up the syringe. When the syringe is full you’ll be able to upgrade one of your abilities.

Exit the shack search around the south area for a narrow passage.

If the passage is there, you can move through it and you’ll find a wardrobe in the way. You can take the items inside and also drag the wardrobe out of the way to to reach the generator.

While the maps may be randomly generated, they still typically keep things uniformly in specific areas. For instance you’ll find another farm house with some boards and nails inside just east or northeast of your shelter.

Grab the supplies and head back to your abode. You’ll need to craft some new gear at the upgrade bench in the house. To craft items you’ll need to drag them from your inventory slots and place them into the crafting menu. If you have the proper supplies the items you can craft will turn white. 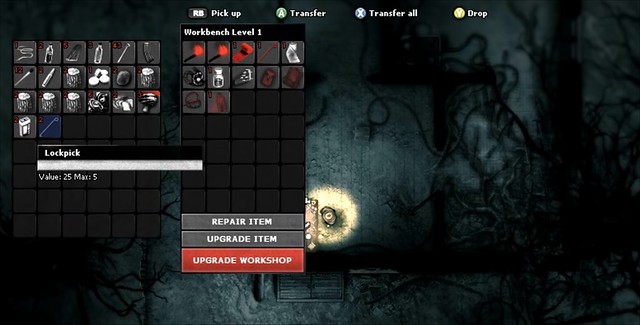 Now you’ll find another house further north of your shack and there will be more red mushrooms and an underground entrance that leads to the tunnels. Be sure to dismantle and take all the bear trap scraps along the way.

There are some additional supplies in the tunnel, including a backpack with a moto magazine in it along with a few other supplies.

Further into the tunnel there’s an armored door with the number 21 on it.

You can examine the handle and look through the keyhole, but you’ll need a key to get inside.

After you examine the door the screen will shake and something will begin to hound you down. Unless you want to become mince meat, it’s best to hightail it out of there and leave the shack.

Make your way back to your house, make sure your generator is full and the saw has some fuel. You’ll be able to use the saw to cut up the wooden logs you’ve collected and then turn them into smaller planks that can then be used to make barricades for the windows.

This will enable you to survive the night when the creepers come out for flesh.

In the early goings you won’t have much in the way of protective equipment or offensive weapons so it’s important to to avoid the dogs or any sort of combat. Make sure all your windows are boarded up and use the desks or wardrobes to push them in front of open doors or spaces.

You’ll be warned when night falls, so make sure you turn on the generator and lock yourself inside your house at nigh.

As demonstrated in the video, the best tactic is to stay in the corner of the room and make sure the doors are blocked and the windows are barricaded. 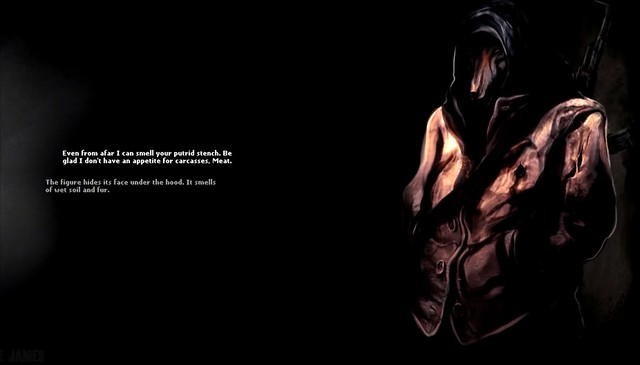 Once the night ends the music will swell and you’ll be on Day 2.

Wolf will meet you at the door. He’ll give you a mission to enter into the Silent Forest, but you’ll need equipment.

Buy some nails and tape from him and anything else you need to upgrade your workbench. Also trade him any spare ammo or weapon parts you’ve acquired in exchange for gasoline, since you’ll likely need it for the generator.

The Wolf will mark on your map where you can later find him. He’ll be located in the Dry Meadows.

Before you head there you’ll need to upgrade your stuff, acquire better weapons, and improve your base stats. That means you’ll need to gather more red mushrooms for the protective potion, and stock up on healing supplies.

Further east of your house you’ll find another shack with some supplies, including a white dress for a child and some more red mushrooms.

There should be a crop field north of your shelter with a broken tractor nearby. You can grab some additional gasoline from the broken tractor. There’s also a locked crate that you can use to pry open, which should have additional supplies inside, such as more gasoline. You’ll need to use the gasoline to replenish your generator and saw.

Obviously you’ll need to use the saw to cut up any additional wood you acquire so you can create more protective defenses for your house in order to survive the second nightfall.

Remember that when the sun begins to set go turn on the generator so that you’ll have lights, and be sure to close all the doors and barricade yourself in your room until morning.

Now one thing to be wary of is that you may hear a rapping at your door. A light *tap, tap, tap*.

Do not go to the door! 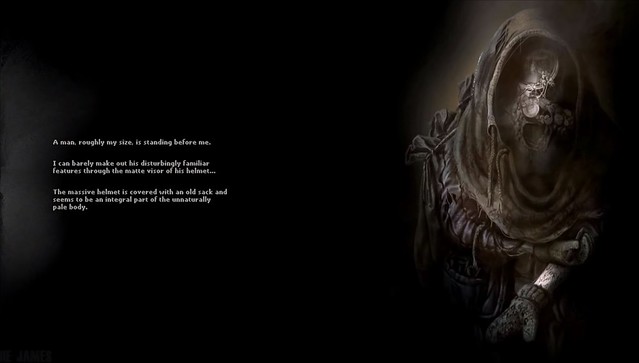 When the night ends, you’ll encounter a trader… the man who saved you from the deranged doctor.

The trader will have some decent supplies for you, depending on what you need to acquire.

Far north there’s a mysterious house but you’ll need a key to get inside. In the meantime you can take the gasoline out of the broken generator. If you have a lockpick kit you can get into the house.

If you don’t have a lockpick kit you may need to acquire the necessary supplies in order to craft a lockpick.

Further east of your shelter there’s another toxic house. You can use a torch to clear out the toxic mold by swiping at it. There’s a crazed man inside along with a note that has a door code that reads: 3333

Gather all the supplies you can from the house and proceed further east through the Silent Forest.

There’s a new shelter there that you can use as a hideout. It’s basically like a checkpoint.

Keep in mind that none of the items that you had stored at the last checkpoint will carryover. So if you had a bunch of items in storage at your original hideout, they’ll stay there until you gather them up and bring them over.

The new hideout will make it easier for you to get to The Wolf’s camp in the Dry Meadows. 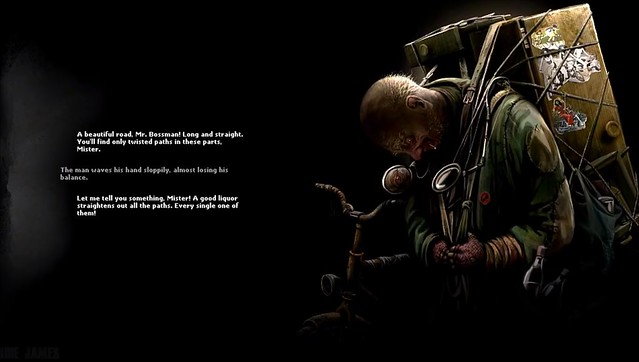 After your next major upgrade with the mushrooms, you’ll be transported to an underground tunnel in front of the door with the numbers ’21’ on it. Look through the key hole and you can go inside. There’s a pathway that will eventually lead you to a room with a lantern. If you turn it on the room will turn into a floor filled with bodies. Turn it off to proceed further east by northeast and there’s a bed. Interact with the bed to end the sequence.

Outside you’ll find a Bike Man, who will request of you some alcohol. You can choose to sate his request if you have any alcohol in your inventory or you can let him be.

Following the encounter with the Bike Man you’ll be able to further explore the area. There’s a fortified bunker and a villager’s house further east. Careful going into people’s houses, as they’re deranged and will attack you.

If you decide to stay at the shelter in the Silent Forest, be warned that it’s a lot harder to protect yourself there and you will need additional supplies to safeguard yourself against intruders.

If you have bear traps, be sure to place them in front of the doors. Deranged attackers will attack the compound and will hit at the doors until they can get in. If you use the bear traps then it will not only damage them but also keep them stunned long enough for you to attack them.

The best and safest bet is to lock yourself in the bathroom. There are around three to four attackers who will come after you on Day 3, so you’ll need to have your healing supplies ready and your weapons in tow.

Barricading the door and pushing objects in front of them also helps, as it makes it harder for the attackers to get inside.