Three One Zero’s ADR1FT floated out onto Steam recently with some rather mixed reviews, but that didn’t stop a bunch of gamers from wanting to enjoy the adventure nonetheless. ADR1FT isn’t a very long game, but it’s easy to see how some gamers might get lost or stuck on some parts, and there is a visual gameplay walkthrough available for the space survival simulator.

YouTuber Nokzen N. does a complete gameplay walkthrough from start to finish of ADR1FT, covering how to repair the broken systems, upgrade the oxygen and find the audio logs. You can check out the video walkthrough below. The game is around two and a half hours long, so you won’t be watching (or playing) for that long.

After the initial intro sequence where Alex crawls into one of the broken pieces of the space station, it’ s possible to float around and grab some oxygen canisters to restore the oxygen in the suit.

The path through the broken station moves players through the various corridors. Despite being in space, the pathway is fairly linear.

The object is mostly to slowly float from one part of the station to the next. As mentioned, even though you’re in space, the route is kept very linear. There are mostly a lot of indicators on where to go next.

After you get into the main station, you’ll be able to get part of the suit repaired by moving toward the EVA suit repair station. While moving through the station you can also find various notes and logs on the computers.

After you move through a few more corridors and listen to an audio log from a former crewmate, you’ll need to head back out into space through a broken window in the station.

It can be a little tricky once you get outside because the linearity seems to fade away. When you need to do is move alongside the broken part of the station you exit. Continue to move along the broken corridor until you see the title “Han-IV Spiritus” appear. Move toward that location and continue to proceed through the broken corridors. Things will begin to get linear again once you get to the corridor with the access door. This will lead you inside a part of the station where greenery is growing out of the crevices of the cylindrical pathway. 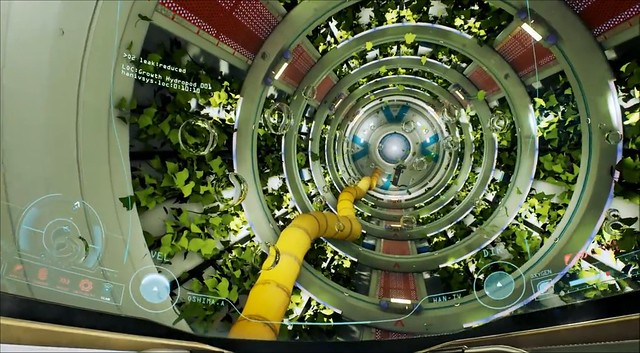 As you move through the pathway and get deeper into the station, you’ll find that there’s a multi-path area with various icons that you can see through the doorways. You’ll want to move toward those icons (the first door to the left in the section with the giant tree) because one of those icons will lead you to an EVA repair station.

After you move further through the corridors and get the recording featuring Lucy’s recital, you’ll find that one of the broken station wings has a body floating inside. You’ll find it’s the crew member McDonagh.

After going through the main space station and heading through the upper decks, you’ll find a terminal that will expand your oxygen meter further with a suit upgrade.

After you find a few more audio logs you’ll eventually be able to fix the Cerebrum terminal with the terminal chip device and begin to repair an escape shuttle.

If you head to the Vocalis terminal after installing the Cerebrum module, they’ll let you know that the module is damaged and you’ll need to construct a new one from the mainframe to get the core back online. 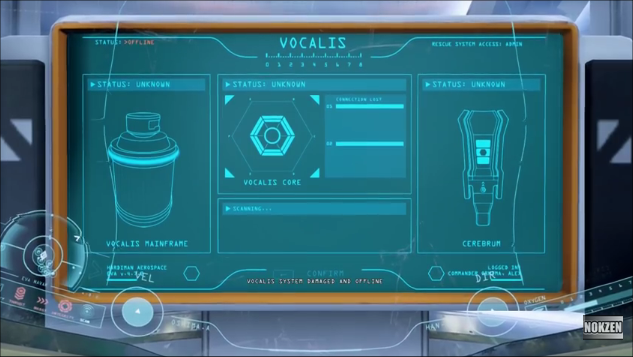 You will need to do some trekking around the station to repair a few more of the station’s systems, mostly by interacting with the terminals. One of the diagnostics will inform you that you will need to repair three of the core systems on each wing of the station. To help players along the way there are checkpoints scattered around the HUD to help locate each of the mission objects as you uncover them.

There are no actual logic puzzles to solve, all of the objectives simply require interacting with various terminals around the station.

For repairing the communications arrays, it requires moving through each corridor, through the disabled array sphere and toward the terminal on the opposite side of the corridor to turn the array on. This must be repeated for each disabled array.

After repairing the three communication arrays at the Vocalis terminal you will find that you still can’t establish communication with mission control. So you’ll have to continue through the station, reactivating terminals and finding mission logs.

If you manage to make it through to the next terminal going through the corridor beneath the communications array terminal, you’ll head towards another room with a terminal where you can repair the thrusters on the EVA suit and get a non corrupted Cerebrum module.

After you get the repaired module, follow the objective waypoint through space to head back toward the main station hub. You’ll need to turn the Filtrum modules back online at the Spiritus, Vocalis, Solaris and Mobilis stations, as indicated in the image below. 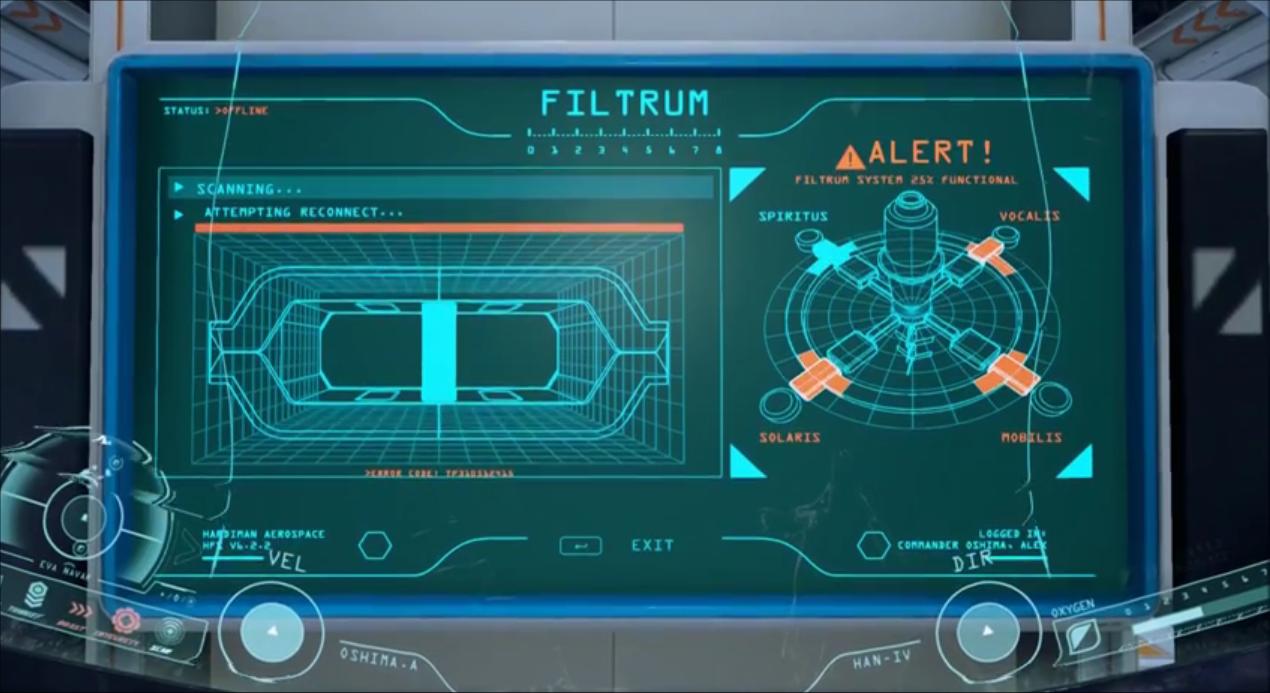 While repairing the coolant modules, you can take the repaired Cerebrum module back to the central control to open up the communication array system with central command.

Players will have to continue to do more fetch quests with finding terminals, repairing systems and listening to audio logs along the way.