The newest and final DLC for Call of Duty: Black Ops 3, Salvation, has been made available. The DLC pack contains the finale for the zombies mode called Revelations. Gamers looking for Easter Eggs and help with uncovering the secrets will find everything they need in a gameplay walkthrough that covers all the basics.

YouTuber NoahJ456 does a series of videos for the new DLC map for Call of Duty: Black Ops 3. You can check out the Revelations Easter Egg walkthrough video below. The actual Easter Egg hunt doesn’t start until two hours in at the 2:05:00 mark.

You can complete one of the first challenges by activating the Corruption Engine, which will spawn some demon monsters. Do not kill the demons, just wait for them to spawn and then disappear and the challenge will be completed, along with the activation of a turret.

If you don’t have time to view the whole video, you can check out the list of achievements in text format, courtesy of Xbox Achievements.

You can access each area by unlocking the areas and then activating the Corruption Engine to get back to certain areas.

If you head to the prison from the Mob of the Dead DLC, you’ll find another summoning altar part in the lower part of the prison in one of the rooms across from where the Corruption Engine is.

You can also find Al’s Hat in an empty cell on the sink leading outside of the prison from the Mob of the Dead area.

You’ll find one of the summoning altar pieces through the pyramid area from the Der Eisendrache section. You’ll need to first open up the gate section from the starting area to get to the Der Eisendrache area. Another piece of the summoning altar piece is located in the second part of the Mob of the Dead area after you pay to remove the file cabinets blocking the stairwell that leads out to the Corruption Engine.

Head to the trenches of Verruckt and begin to craft the Summoning Altar at the designated location.

You’ll first need to activate all of the portals to light up the console that has the green panels on it. Once all of the panels are lit up wait for the giant Cthulhu monster to fly by and activate the machine to electrocute it.

After electrocuting the monster, it will fall down near a platform. You’ll need to get eaten by the monster and you end up in its intestines. You’ll need to shoot the highlighted orange bulbous areas around the giant orange organ at the back of the stomach. After disconnecting the organ from the rest of the body, the Pack-a-Punch machine will drop out of the organ and you will be able to upgrade your weapons.

If you managed to get your hands on the Estulla Astoth, the Cthulhu-looking tentacle gun, you can actually upgrade it. First, you’ll need to head to the gun chest to get a new gun, and you should see the giant tentacle looking weapon appear at some point. You can either try to grab it while it cycles through or wait for it to random stop on the Estulla Astoth.

Once you get your hands on the weapon you’ll need to look up into the sky and find blue tablets. Once you spot one in the sky you’ll need to shoot them with the Estulla Astoth Apothican Servant. In order to find the locations of the blue tablets, it’s showcased in the video below, giving you a good idea of where to go in each section to get your hands on the tablets.

Most of the tablets are at the entrances of each of the map sections you teleport into. Just look up into the sky to spot them, even though they may be hard to find due to how they blend in with the environment.

If you’re not sure how the tablets look, you can see what they appear like in the sky with the image below, which highlights the tablet. 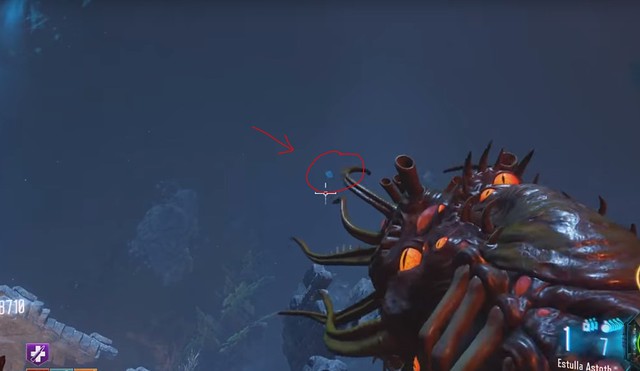 Next up, you’ll need to head through Verruckt to the jump portal and aim up at the giant blue sphere and shoot the tablet. You’ll then find the final tablet at the start of Verruckt just on the right side of the giant obelisk, and you’ll need to shot that tablet.

How To Get The Dragon Shield

The first part can be acquired on a table counter in the Verruckt section of the map through the torn down structure.

The third part of the shield is located at the trench in the Origins section. You can head to the work bench after getting all of the shield parts to construct the Dragon Shield, the same one from Gorod Krovi.

YouTuber Swifterrs shows where you can get the shield parts for the Dragon Shield in the video below.

You can get a free perk as well by wall running through the anti-gravity section in the Der Eisendrache section and following the path just outside the temple.