Cyan Inc’s first-person puzzle game, Obduction, is currently available for PC. The new game was crowd-funded to be the spiritual successor of Myst and Riven from so many years ago. The puzzles in the game are no laughing matter and will challenge even some of the brightest minds. Thankfully there is a walkthrough available for the game.

YouTuber Nokzen does a multi-part walkthrough for the game, covering all the necessary puzzles and the ways in which they must be completed. You can check out the video series below.

The early parts of the game are just about exploration. They let you move around and listen to some messages from some of the residents of Hunrath, including the mayor. They basically give players the basic rundown on the ecosystem and the living conditions of Hunrath.

If you manage to travel to what looks like a Western-themed mining facility, you’ll encounter a message from one of the residents about getting the power back up and running. You’ll find the message through the house in the area where red and blue lasers are firing out.

You’ll need to take the lift by the waterfall up to the top of the waterfall and follow the path around until you get to an area where there’s a lever that opens the dam up to let more water flow out. You’ll be able to travel down by the waterfall area to listen to another message about a fresh supply of water, as well as move to the next area by lifting up the left side of the propeller gate and then pulling the lever to open it up, leading to a new pathway.

You can head to another facility back near the train cart where the gas station is. There’s a door in the mountainside leading back to the house you encounter at the start of the game, which can be opened using the code: 6341 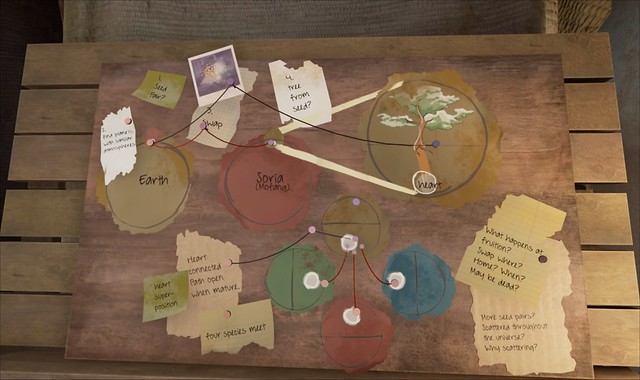 You’ll find a map inside, a cassette tape you can listen to, and a few other trinkets that help explain some of the world of Obduction.

If you head over to the manual power generator setup through the train cars, you’ll notice it is turned off. You can turn it on by first heading over to the gas station and cranking the handle at the pump to fill up the tank. Head back to the train car and flip the switches to turn it on, as well as turn the primer on. This will boot up the generator. Activate the generator and then head back to the area with the red and blue laser beams. You’ll now be able to enter into the rickety old building with the blue laser.

Head up the platform and lower the blue laser device. 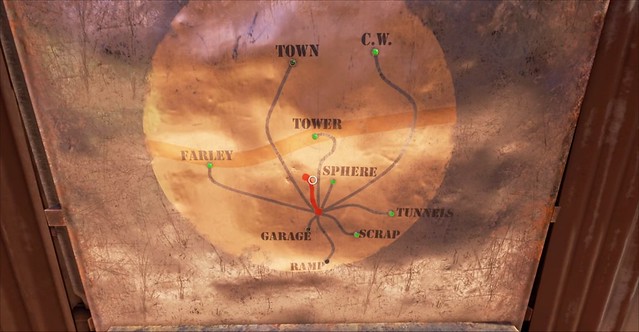 You can then walk out across the tracks while upstairs in the blue laser facility to toggle a valve on the giant tank with a yellow tube attached. Head down and hop inside the cart with the blue laser. You can ride the cart around with the laser. First aim the blue laser at the red laser to disable the forcefield.

You’ll then need to toggle the tracks to avoid ending up at dead ends. You’ll need to travel along the rail toward a giant blue and purplish area. Park the cart just before the door; and open the door that leads to a blocked mineshaft. Use the blue laser and aim it at the mineshaft to clear the pathway.

You’ll need to touch the purple area just behind the house in order to teleport to the upper part of the mountain region where you can travel around and lower a ramp, as well as move toward an area that leads to a vertically erected school bus that is used as an elevator. You’ll need a code to activate the bus.

There’s another area you can travel to as well in the opposite direction of the school bus that will lead you to a small black device on the ground. Activate the device and it will teleport you to a new location but there isn’t much you can do there right now so head back to the desert plateau. You’ll need to head to another area on the desert plateau that takes you to tractor elevator. Take it down and then proceed through the garage where there’s a robot featuring a black and blue puzzle. You can see how to solve the puzzle with the video below at the 9:45 mark.

If you solve the puzzle correctly it will result in the code: 406 appearing.

Head back up to the bridge over the one waterfall area that leads to a locked sliding door with a keypad on it. Insert the code 406 to open the door.

The bus area will eventually lead you into the area that with the tree of power. You can turn on the switch to power up the tree in order to unlock new areas to venture to.

Head back to the area where you were first given the task to power up the tree, and talk to the guy about what you’ll need to do next.

Some new areas will open up that will allow you to travel to, including a new mountainous region. You can check out the video below to see how to reach the area through the teleporter.

You can follow the path down to an area that leads to another teleporter, which will lead you to some cliff side ruins.

You’ll be able to enter into an area with some complex machinery and a giant fan located in a chasm. Head through the walkways into the lower part of the facility where you’ll find a series of cranks and valves. You’ll need to activate them to get the fan working.

Proceed to the elevator and take it down into the lower parts of the mountain pass.

Head back to the desert plateau where the teleporter is located that overlooks the mining facility. Head back up to the ruins and you’ll be able to access an all new area lined with giant skeletal remains. How to get there exactly can be viewed through the video below.

You’ll need to go through a series of portals, solve a very simple puzzle and then head back to the main ruins area where the purple flags are waving by using the teleporter.

You’ll need to head to the yellow teleporter that will take you back to the house at the beginning of the game. There are some additional journals to read.

Head through the jungle up into the observation area where you’ll be able to use a switch to activate the blue laser, utilize the lever to move the blue laser over to the red laser to disable the forcefield.

You’ll need to solve a bridge puzzle in order to get to the other side. How to complete the puzzle can be viewed in the video below at the 10 minute mark.

After completing the puzzles to restore both bridges. The bridge on the right hand side will lead you to a teleporter.

After traveling to the other section of the jungle area, you’ll need to rearrange a maze puzzle by flipping some levers and then proceed to solve another connect-the-dot puzzle.

One of the other objectives of the maze puzzle is to redirect the maze to face the indented wall to the right. Rearrange the maze so that you exit to the path on the right and then walk through the maze and to the wall and proceed to touch the wall. You will be teleported to the next segment.

You’ll need to eventually activate a carrier transport that will take you to another area of the jungle. How to get to the transport is covered in the video below.

You’ll eventually happen upon one of the aliens who has been crushed by some of the debris nearby. A rucksack with a journal inside can be found close by, along with view panels with numbers on them.

You’ll need to complete another connect the dot puzzle that will activate an elevator and transport you down into a secret facility.

The chamber contains countless capsules with humans locked away inside, supposedly being used as fodder for the aliens. 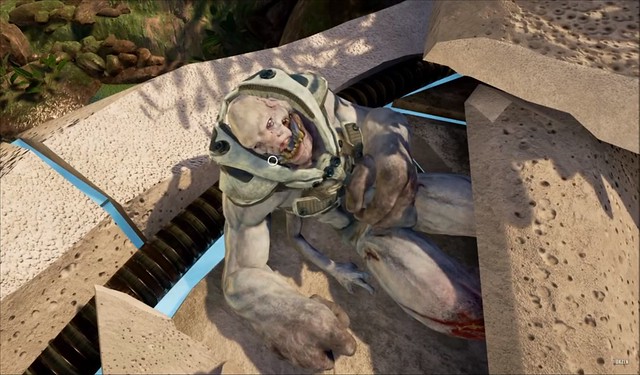 After you travel through the chamber with the capsules and continue to move through the jungle area after coming out of the facility, you’ll eventually encounter a red floating hexagon. You’ll need to head up onto a plateau and use the blue laser to destroy the red hexagon.

If you follow the path back to the tree of power, you can fill up the room with the green liquid and travel through the portal rooms to the other areas.

After traveling through the red area, you’ll need to find the tree of power and activate the water source. This will power the teleportation to the other trees of power.

Head back to the canyon area atop the spherical power unit where the teleporter is and activate it. It will take you to a location where there are many buzzing creatures flying around in a cavern.

After moving through the cavern you’ll need to head back to the area with the giant fan and utilize a complex dial and switch system by inserting a series of numbers. You can see how to complete the puzzle by following method used in the video below at the 10 minute mark.

After messing around in the giant fan room you can head back to the portal that leads you to the canyon and press the button on the rotating orb station where the teleporter is and have it face toward the direction of the waterfall. Activate the teleporter and then head through the pathway with the buzzing, flying creatures until you get to a part that leads through a disabled flywheel. Head through that pathway until you end up at a tree of power with blue water. Activate the valve to fill it up and unlock the blue portal.

Head back to the canyon and talk to the guy in the capsule, C.W. He’ll let you know that you’ve basically completed the tasks at hand, save for one more mission: you’ll need to stop what’s called a “Bleeder”, which is currently draining all the power in the station. Head up through the facility where you first encountered the blue laser and follow the pathway up through the mountains all the way to the next location where there’s a satellite tower buoyed in the water. Head to the tower and flip the yellow switch.

Head back through the canyon where the vertical bus is located and head to the top of the bus. Head just outside the bus and there’s a switch where you can blow up the satellite bleeder.